Feeling frail. Not at all sure of myself today. Can anyone relate? All of my Facebook friends have been taken away. My account and groups no longer exist. Chuck is … somewhere out of cell phone range. I’m letting fears rule over my thoughts and emotions. Feel very alone, even though I know that my Prayer Warriors remember me. I’m not able to get feedback from them. Lord, I’m wondering how my life will end, though I’m actually doing well physically. Hold me. Hug me. Remind me of who you are and why it is that you have loved me all these years. Thank you.

Welcome to my private place — my “rusty space” —

where you will find nuggets about my private life, my deepest thoughts,

and this and that … depending on the moment.

The name for this section of my blog comes from the devotional that I published through Westbow Press in December of 2012 titled, My Armor’s Kinda Rusty … Encouragement for Weary Warriors. I will be sharing from those writings periodically when my muse leads me in that direction. In my book, I shared a lot of personal insights that I believed might be helpful to others. Writing about things that I remember from my childhood through my teen years and reflecting on the world through the eyes of an 18-year-old bride in the 1970s proved therapeutic for me in areas of remembrance and mental struggle.

When I got to the parts about raising a daughter and a son  (and eventually accepting a second son and additional daughter into my world) while my husband remained captivated with running a family business from morning until night and practicing  jack-of-all-trades projects on the side, that too was emotionally freeing.

As I recounted experiences that were unique to my birth children, which took me on physical trips from Southern California to Phoenix, Arizona, and on mental journeys to Mexico and Central America — where my kids journeyed but I did not. I thought I was prepared for pretty much anything. Then came the part where my husband and I left our barely 18-year-old Jonathan alone in New York City to pursue his dream of making it big under bright lights. That’s when my emotional maturity took a back seat to spiritual growth.

I am continually amazed by how God manages to take me one step further than I thought I would ever voluntarily go. I have experienced moments of euphoria and depths of depression. I have become buried in crippling sadness and raised to mountaintop heights. I have thought I’d seen just about everything only to find there exists in this world horrors and unfairness that my naive mind could never have imagined on its own. Indeed, my loving heavenly Father waited until I had reached my 60s to reveal to  me unthinkable things that others were experiencing … in real time.

I am crafting this introductory page on September 23, 2018 at 9 pm PST with my 5-year-old Australian Shepherd “resting” at my feet — highly unusual for her constantly busy demeanor. I’ve just come from an inspiring evening church service, where I realized that I have lived what the pastor referred to as “accepting the hard road as opposed to choosing it.”

I am a writer whose path in life has reflected more begrudging acceptance than actual choice. I am a daughter of the Most High King and sister of the One who endured an excruciating death in my place as payment to Lucifer — the “morning star” and current landlord of planet Earth — for my eternal freedom with Him in paradise. My spiritual armor is damaged and rusty. But I look forward with great anticipation to the new body clothed in LIGHT that awaits me at my ultimate destination.

I have much to share with whoever is willing to make time to read what I’ve written and displayed here on this website. I invite you to journey with me, all the while remembering that you and I are imperfect, despite our most courageous efforts to grow into what our culture considers perfection. But as members of humankind, we each have unique bits of encouragement to offer to others.

Be blessed and BE A BLESSING to someone while today is still being called TODAY!

P.S. You can find my e-book on Amazon.com if your curiosity leads you to read it. 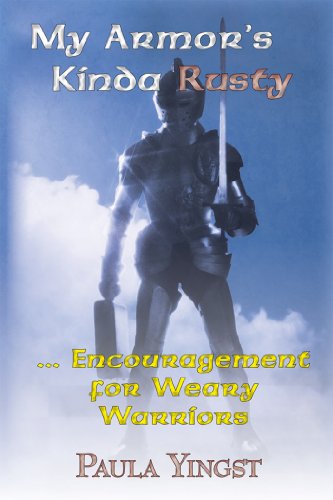 (from My Armor’s Kinda Rusty)

“Man without God is a beast,
and never more beastly than when
he is intelligent about his beastliness.”
—  Whittaker Chambers

It was January 1995. Fibromyalgia symptoms had begun attacking my body and mind one year earlier, nearly to the day, and I’d undergone every test that my doctors and specialists had been willing to order for me. I still did not have a satisfying diagnosis and wouldn’t get one for another six months. Once again, I felt like I was doing battle with some unidentified, relentless foe.

Lisa was back at college in Phoenix after Christmas break. Jonathan was on the treadmill toward high school graduation. For years I had convinced myself that I would be overjoyed when that moment finally arrived, but now I was realizing that I would miss the delightful madness of my volunteer work with teens. And since I didn’t know what was happening with my health, my future as an “empty nester” seemed much more bleak than I’d been willing to consider up to that point.

That winter afternoon I was at a loss for something to do. My immediate desire was to crawl back into bed and cover my head with pillows … many pillows. But I knew that wasn’t the route I should take. Then I remembered the gift certificate to the Christian store in town that Jon had given me for Christmas. I’d tucked it away and had all but forgotten about it. A shopping trip would hopefully relieve my doldrums. So I located my shoes and purse and dragged my sorry self off to the car.

When I entered the store, I felt surprisingly underwhelmed. Ordinarily, I would have immediately noticed any number of things that I wanted to buy, only to realize that I didn’t have enough money. Or I wanted to browse but didn’t have the time. Now I had both time and a generous gift certificate, but absolutely nothing clamored for my attention.

I strolled past aisles of books, stationary, gifts and artwork. Then I started over and did the walk-through thing again. Nothing – nada – seemed of any interest to me. I was just about ready to exit the store, when my eyes drifted toward a corner shelf filled with books and labeled “PROPHECY.”

My first impulse was to turn away. I was not in any way interested in the opinions of men who were convinced they knew the mind of God concerning the future. I actually felt a mild swell of bitterness toward the authors. But then I felt a gentle urging…. Go check it out. I want you to….

As I walked closer, my eyes were drawn to two books in particular. One was Planet Earth: 2000 A.D. by Hal Lindsey. The other was A Woman Rides the Beast by Dave Hunt. I remembered that, when I was a kid, I’d seen a book lying around my grandma’s house called, The Late Great Planet Earth, also by Hal Lindsay. But I had no idea who Dave Hunt was, and at that moment I could not have cared less.

A small spark of curiosity encouraged me to step up to the plate, pull the books down and flip through them…. Interesting. So, since I had not found anything else that I’d even remotely wanted to purchase, I decided that these would do. And as a result, I was introduced to the pre-tribulation rapture theory and a select history of the Catholic Church.

When spring rolled around, I accepted an invitation to go shopping at an outlet mall about a 45-minute drive from my home. I was still struggling with pain and unanticipated onsets of fatigue, so I wasn’t actually convinced that I should tag along. Once again I had nothing in mind that I was shopping for.

We came upon a bookstore, and as I was strolling and browsing, the same thing happened that I’d experienced at the Christian store in town. Two more random books commanded my attention! The first was The Pre-Wrath Rapture of the Church by Marvin Rosenthal. The second was written by Robert Van Kampen and titled, The Sign. The subject matter of both newly found books seemed very different from what I’d been reading in Hal Lindsey’s book. I felt burdened to buy them – and after all, they were deeply discounted.

Those four books and my Bible became my companions as the debilitating “fibro” symptoms pulled me away from the company of family and friends. I was hard-pressed to stay awake during the day, but when night rolled around I was wide-eyed. So I would sit in my favorite recliner and read and read and read. I’ve never been a fast reader, but that didn’t matter. Nights can seem unbearably long when there is no relief from physical pain. Fastidious reading helped to occupy my troubled mind.

As time dragged on toward the beginning of a new century, it became apparent that I’d been led to those books for a purpose. I just had to figure out what God wanted me to do with the information.

“‘For my thoughts are not your thoughts,
neither are your ways my ways,’ declares the Lord.'”

Think about it: “The supernatural is the native air of Christianity.” — Dora Greenwell