I have waited many years to share some of these things that I know will shock and hurt many people. The reason I can say that: It’s how I felt when the Spirit of God revealed these things to me back in 2018, when I was learning about Qanon and WHY they were gradually (sort of) introducing me to TRUTH and HARD FACTS that most people didn’t understand at that time.  (Many still refuse to believe these things.)

I’ll get right to it with a few examples …

The Occult Roots of The Wizard of Oz

The Occult Roots of The Wizard of Oz

Armie Hammer, Cannibalism and the Sickness of the Elite 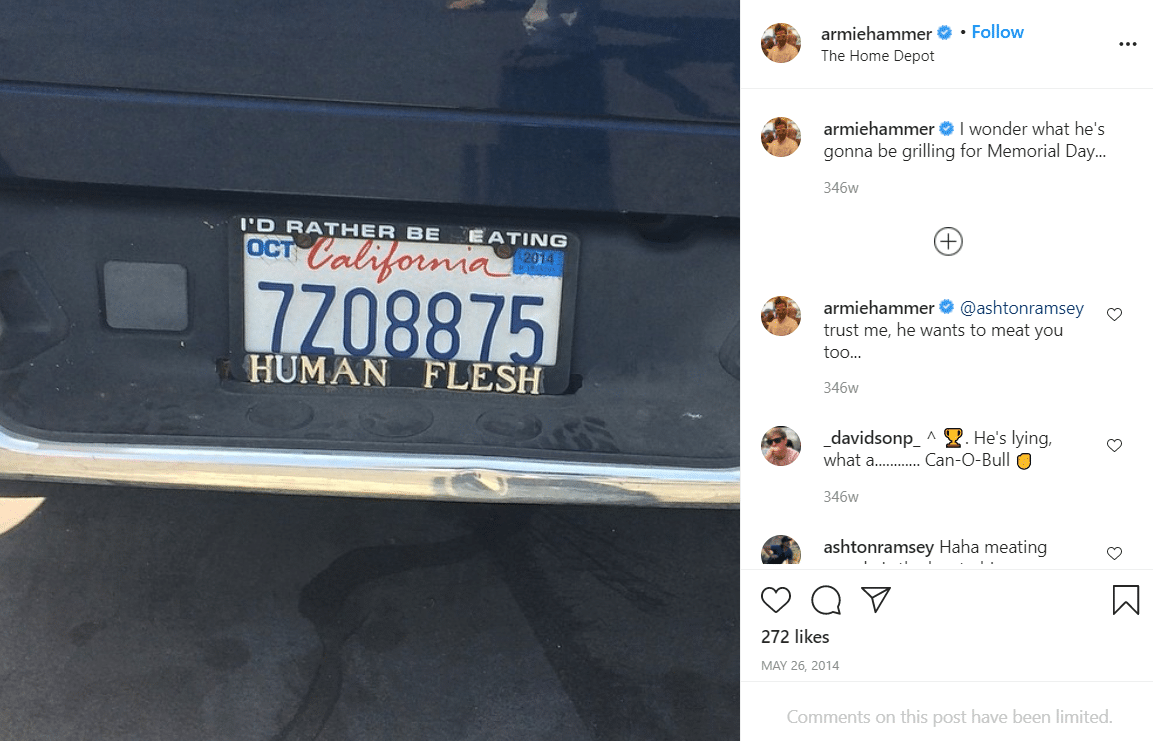 Hammer posted a picture of a license plate that says: “I’d rather eat human flesh” with the caption “I wonder what he’s gonna be grilling on Memorial Day”.

MANY Hollywood elites — actually they’re spread out across the country and the world — are Satan worshipers, and they use their talents for acting,  pretending, and lying  to deceive people into thinking they are much more grand than they truly are.

Make no mistake, there are Christians in the mix who choose not to speak out because they fear for their lives and the lives of their children and family members. I have been saddened and horrified by things I’ve learned over the past 3-4 years.

LOVE Gloria Vanderbilt clothing? Did you know that Anderson Cooper on CNN is her son? Check out this TRUTH about the mother and the son …

Anderson Cooper with his mom, Gloria Vanderbilt. Notice anything interesting? 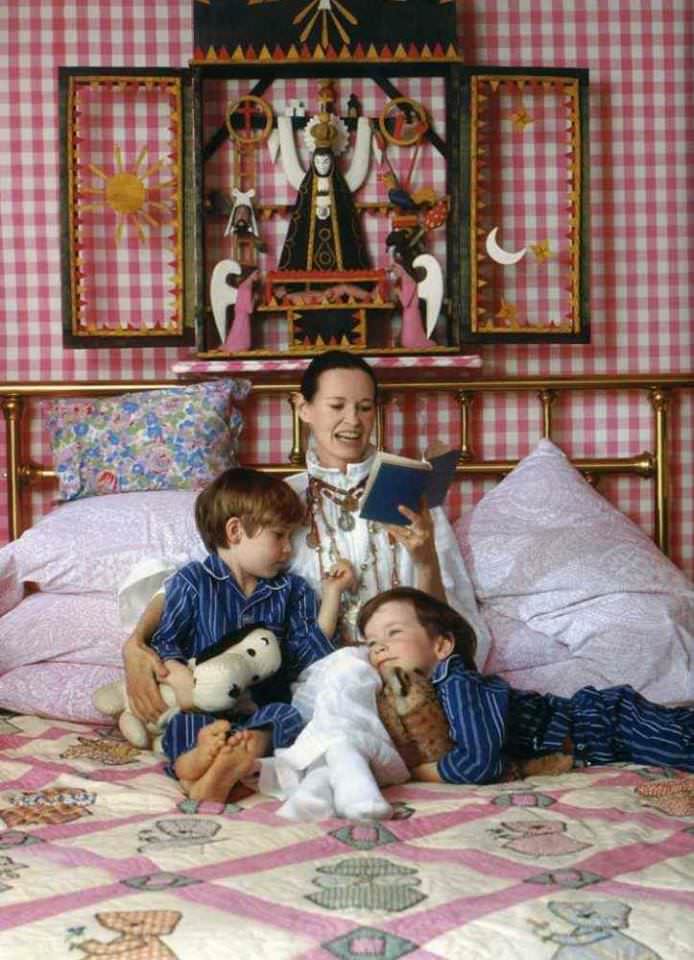 How do you make an alter? You induce trauma. You keep inducing this until the automaton emerges to the surface. This is the essence of trauma programming. To preserve a trauma program hereditarily you use a transmittable bloodline. The Rhesus (Rh-Negative) blood type is the best-reported vessel for hereditary preservation. Royal blood is programmed blood that’s been passed down for centuries. Real historical figures like Vlad the Impaler were programmed as alters with cannibalism. It made their family bloodline ruthless and successful. Powerful families raised there programmed psychopathic killers to protect their legacy. This behavior emerged as a form of elite survival. Our nations are still ruled by these same alter families because of this trauma programming. An alter is a zombie under an ancient spell of energy, frequency, and vibration…. 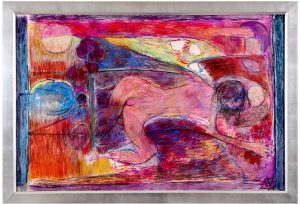 Gloria did not know she was an alter. She knew she had these dreams but she considered herself a deeply spiritual artist. She had all the money in the world to convince her she was gifted. Her family were the chosen. She believed her purpose was to share her artistic vision of pattern and form. She was a trendsetter. Gloria never considered ritualistically killing one of her children. … she had been programmed a long time ago. All she needed was to hear the trigger and she would run the trauma program known as Dark Mother…. 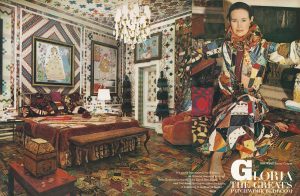 Gloria could not rest her mind comfortably anywhere inside a solid patch of color. Any form of stillness or serenity drove her mad with rabies. Every surface of her life had to be splintered and minced with pattern. She found the darting of her eyes to be soothing. Gloria’s DNA was vibrating from centuries of programmed trauma. She was a cauldron of madness fueled by the trappings of dynasty and dopamine.

The Satanic ritual murder of Carter Vanderbilt Cooper began one afternoon while he was napping. Gloria turned to page 25 of her The New Yorker Magazine and read her trauma program trigger. It was a single sentence from a story called White Angel. She instantly stopped all of her jittering as her mind went still over the story. It was July 22nd, Mary Magdalene feast day. [Mary Magdalene is said to be the mother of a baby girl who was fathered by Jesus Christ.] Her pupils had dilated into black sunken saucers. She started her program and transformed into a methodical spider. Gloria folded a finger inside the magazine and told herself she must share it with Carter. He had come home to mourn the recent loss of a girlfriend. Gloria found Carter on the bed in his older brother’s room. “I’d like to read to you for a bit” she said, as she sat calmly beside him. Carter noticed something different about his mother but she interrupted him saying, “You’ll feel better.” She opened the magazine and began reading the story of the White Angel. 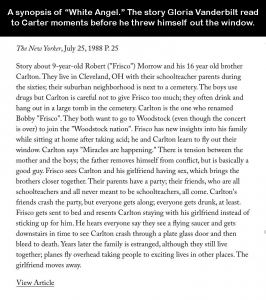 Carter had heard this same story as a boy. He did not remember it though. Not yet. It was a story of two brothers, a voyeuristic sex act between them, a dose of L.S.D., and it ends with one of them bleeding to death after bursting through a plate glass window. Carter listened to his Dark Mother read him his trigger. Carter’s pupils also dilated as his biology spun up his alter. He became compelled to take himself out the window. Carter rushed over to their 14th story balcony and straddled himself over the railing. He turned to his mother and shouted, “F___ You! … Will I ever feel again?” Carter let go and fell to his death. The ritual of the Dark Mother was over. The program had ended….

From My new book Blueprints for Mind Control  by  James True

THINK about Hollywood movies that have had this theme. You may not have watched them, but there are plenty of ads that get the messages out. We have been being programmed for a very long time.

If you wish to dig deeper into the symbolism of Gloria’s necklace and the artwork above their heads, I will let you dive into that on your own. BUT stay aware that any searches on G–GLE are monitored.  I’ve known this since I started researching in 1995. I’m positive they have my name on a list somewhere. But I must do as I’m led by God’s Spirit. Make ABSOLUTELY SURE that you are hearing from GOD’S SPIRIT if you choose to research any of this stuff.

NEXT: Disney’s connections to the occult and pedophilia

This site uses Akismet to reduce spam. Learn how your comment data is processed.