Notes from this episode …

1. Trump has built an infrastructure and the people’s economy (lost in 1971)

3. The illusion of raising pay for lower paid employees

4. Waiting for POTUS to say, “My fellow Americans, the storm is upon us.”

5.  Trump is trying to make everything seem normal for the sake of optics.

6. ANTIFA and BLM showing up at state capitols with weapons! Trump has said that true Patriots do not support violence. Thugs have been tracked for a very long time. The Plan trusts that the “thugs” will be arriving and putting together their plans. (DO NOT PARTICIPATE!)

7. Antifa to be (or already has been) designated a terrorist organization .

8. Chris Miller (acting DNI) is a master of irregular warfare and will be in charge of handling terrorists.

10. President Trump wants things to seem like he is going along with traditional steps to leave the White House. He will board Air Force 1 for a traditional “last flight” as POTUS. May not happen until January 20th, as Biden’s virtual reality Inauguration is taking place.

One thing I have learned from following Q for 3 1/2 years: Expect surprises! 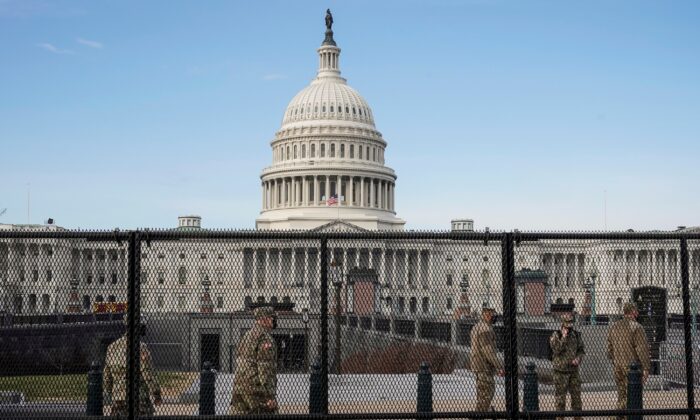 National Guard soldiers maintain a watch over the U.S. Capitol in Washington on Jan. 14, 2021. (Joshua Roberts/Reuters)
US NEWS

2,000 National Guard Troops in DC Sworn In as Special Deputy US Marshals

Chief Lamont Ruffin from D.C. District Court swore in the 2,000 National Guard troops as special deputy U.S. Marshals prior to the presidential inauguration, according to the federal law enforcement agency’s Twitter page.

The “deputation gives the guardsmen temporary, limited, law enforcement authority pertaining specifically to the safety and protection of the inauguration and related events,” the U.S. Marshals said in a caption on its Flickr page, showing the Guard troops being deputized at night.

The U.S. Marshals Service didn’t immediately respond to a request from The Epoch Times about the duties of the new special deputies.

Last week, officials confirmed that as many as 25,000 National Guard members were being deployed to the District of Columbia for Inauguration Day.

I want to share a new message from x22Report concerning what will happen next after the Capitol riots on 1-06-21.

Here is the link for the audio report (some video):

Copy and paste into your browser window if clicking on the link does not work.

I have listened to this source for several years. Listen to the whole thing, or start at 28.00 to jump right into what’s most important …

Ep 2379b – Declass, MEMO Is Just The Beginning, Warning Storm Ahead

1. The January 6th riots in the Capitol were staged by the Deep State.

3. President Trump will be kept safe ( possible on AF1, as Q has said).

4. 25,000 National Guardsmen and women are currently stationed in D.C. awaiting their orders.

5. Anything you see on TV is false.

6. Operation will go ahead as planned by President Trump.

7. President Trump will make the calls.

25,000 Troops In Washington D.C. Have Been Authorized To Use Lethal Force Against The American People

We have been waiting what has seemed to be such a long time. But remember, the Israelites stayed in the wilderness for 40 years! We must stay patient and VIGILANT!