A Brief History Of The Rothschild Family (Continued from https://allthatsinteresting.com/rothschild-party) 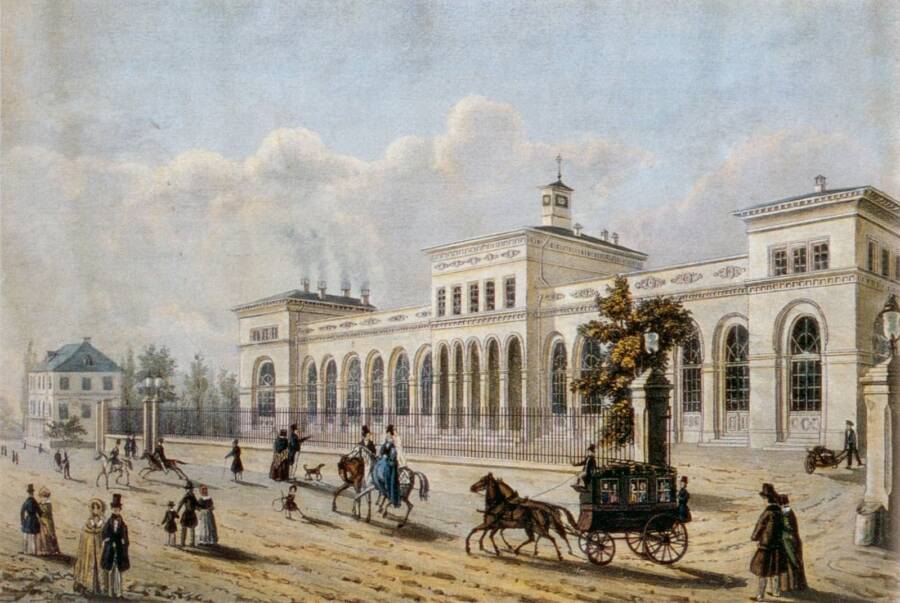 Wikimedia CommonsA painting of Frankfurt’s Taunus railway terminal, which was financed by the Rothschilds. Opened in 1840, it was one of Germany’s first railways.

The Rothschilds dynastic wealth and power began with Mayer Amschel Rothschild, who was born in 1744 in what was then known as the Free Imperial City of Frankfurt. His father, who died of smallpox when Mayer Amschel was only 12, was a money changer and cloth-trader whose clientele included notable figures like Prince William of Hesse.

Mayer Amschel subsequently left rabbinical school to study finance under Jacob Wolf Oppenheimer in Hanover. When he returned to Frankfurt, Rothschild was an expert money trader and seller of rare coins. He met Crown Prince Wilhelm of Hesse, who’d previously patronized his father, and became Court Factor to the prince-turned-king in 1785.

As a banker for the richest man in Europe, Rothschild suddenly became financially secure and started a family. And with increasing connections to European nobles, Rothschild saw the French Revolution as an investment opportunity.

Rothschild sent four of his five sons to the largest capitals in Europe: Naples, Vienna, Paris, and London. These Rothschilds each started banks in their respective cities, through which they funded wars, charities, and infrastructure projects for the next 150 or so years.

Before Mayer Amschel died in 1812, he banned his female descendants from receiving an inheritance, which forced them to intermarry with their Rothschild cousins in order to remain in the same social strata. Meanwhile, N M Rothschild & Sons Ltd. in London nearly single-handedly financed the British Napoleonic war effort.

The family’s wealth also helped finance construction of the Suez Canal, various railways in Europe, and secured a mercury monopoly; a valuable commodity as mercury was then used to refine gold and silver.

And even though the World Wars of the 20th century cost them a pretty penny, the family ultimately continued to thrive thanks to their motto of Concordia, Integritas, Industria, or Harmony, Integrity, Industry.

However, the family’s success has long driven envious onlookers to concoct conspiracy theories about dark secrets hiding behind their wealth. They’re most often accused of using their wealth to steer the course of the global economy.

Much of the bad faith speculating on this family’s dealings has roots in anti-Semitism. However, some criticisms of the Rothschilds are valid. Though they make money from various investments in finance, real estate, mining, and energy industries around the world to this day, they were (and, according to some conspiracy theories, currently are) documented war profiteers.

With their own coat-of-arms, vast wealth, and global influence, it’s easy to see why a Rothschild masquerade ball in the isolated French countryside would raise some questions.

With decorative baby dolls, masks resembling all-seeing eyes, and only a few photos surviving from the infamous Rothschild ball, that night in December 1972 still raises eyebrows today. And the Baron and Baroness behind the infamous party were no strangers to controversy.