I am feeling perplexed. I have spent a good amount of my morning trying to update this post, and it keeps “disappearing” — literally. I’m thinking about the time when Paul wrote that he was not allowed (by the Holy Spirit) to travel to certain places. Could this be what’s happening to me? Or are evil spiritual forces trying to dissuade me?

I came across this post last week, which was published in 2020. However, it seems relevant to this year also, since this apparently happens in the occult world every year.  This is HUGE for devils, demons, warlocks, witches and such, and if you had asked me about this before March of 2018, I would have categorized it as pure fantasy.

BUT I’ve since learned that it is very real, and the people who practice it are very dangerous. (That would include individuals in very high places within the realms frequented by celebrities of many sorts.) This year, (2021) it starts TODAY, Monday the 19th. Check out the meme below … 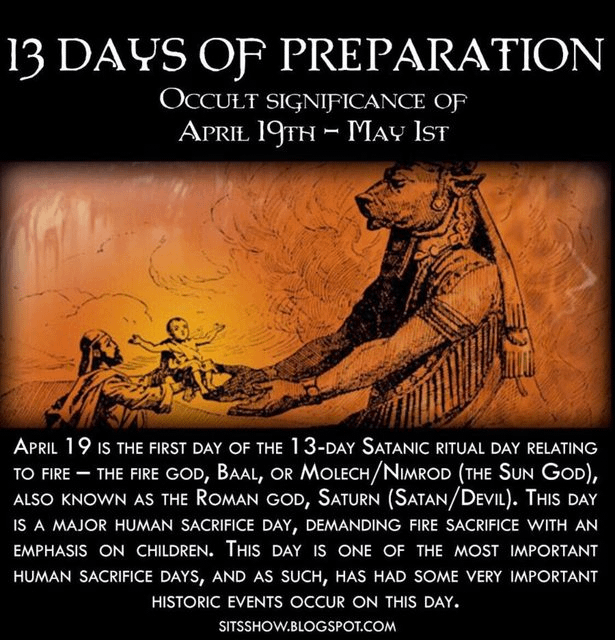 APRIL 19 … that’s TODAY. Now read what I wrote last year at this time — before my account was deleted by Twitter …

This is information that I just discovered on Twitter, posted by a woman who calls herself BlueSky …

April 19th is the first day of “13 Days of Preparation”,  a period of time with occult significance that relates to the satanic gods of fire — the fire god BAAL or the sun god MOLECH/NIMROD, also known as SATURN (the Roman god of Satan/Devil).

A major human sacrifice day, this ritual demands sacrifice by fire, with an emphasis on children. These Luciferian networks are currently being taken down. But these people are pure evil and will stop at nothing to regain control.

According to Justin Deschamps — Stillness in the Storm —  those 13 days are a portion of  the 40-Day Season of Sacrifice: March (19th or 22nd) to May 1st, when dark spirits manipulate the collective consciousness of humanity using Black Magick rituals….

“As many know, false flag attacks have become all too frequent in modern times. The targets of these attacks are the minds of the people by way of elaborate rituals, theater and illusion, for the purpose of deceiving the population into accepting a false version of reality. Once this has been accomplished, an individual will become a willing participant in the matrix of control.

“For all intents and purposes, the people have had a spell cast on them, they have become the victims of black magic, which is always an attempt to compel an individual to act as an agent of the magician, usually without their conscious consent.”

“But the good news is, with knowledge comes power, and with discernment comes immunity to manipulation.”

Okay. It’s hard to go back in my mind to the moments when I first learned about this. The Spirit kept saying to me, Dig deeper. But I didn’t want to. So I held back and started surfing the net instead, which proved to be MUCH MORE TERRIFYING. I’m not going to cover that here. Instead I’m going to give my readers a few important NOTES about this 13 days of Preparation, so we can all PRAY together for the unwitting victims who are likely being deceived and tempted to stepping into a snare. That could include children who have been kidnapped, pizza deliverers, young women who believe they are going to audition for a role, and well, you can add to the list, and you may very well be correct.

These SACRIFICES are literal.

The OCCULT IS REAL. Just as real as was the serpent (the devil in disguise) who appeared in the Garden of Eden and deceived Eve and Adam to change the course of human history, which is actually a mega-series of battles between good vs. evil; between God vs. Satan.

I’m aware of many people who are versed in all of this. I’ve learned many things over the past 3 years. Unfortunately, at the time I wasn’t aware that I was being tutored and would need the information, which came upon me suddenly, at a later date — like NOW.

I’m not going to go into lurid details of real life incidents. So what we need to understand IMMEDIATELY is that this time of SACRIFICE is real and is observed worldwide (including in America) using an unknowing, naive VICTIM.

— Pray for the victims who are being selected. (This is hard to envision but absolutely true.)

— Pray for those who understand this better than I do, who may be trying to intervene and save lives. (#SavetheChildren)

— Pray for individuals who are being sucked into the fantasy world of the OCCULT.

— Pray that these ceremonies will be interrupted in some way (maybe by police, undercover stings, etc.) and the intended victims will be rescued.

“The Lord saw how great the wickedness of the human race had become on the earth, and that every inclination of the thoughts of the human heart was … evil all the time.”   (Genesis 6:5)