As I wrote 2 days ago, things seem to be coming together rapidly in regards to the COVID-19 pandemic. I have learned that the two key “medical experts” — Dr. Fauci and Dr. Birx — have connections to Bill Gates and the Deep State. POTUS has said nothing about this to the public or in his tweets on Twitter, but I’m sure that he is aware and will reveal the truth at the right moment while unrolling the scroll that is The Plan. 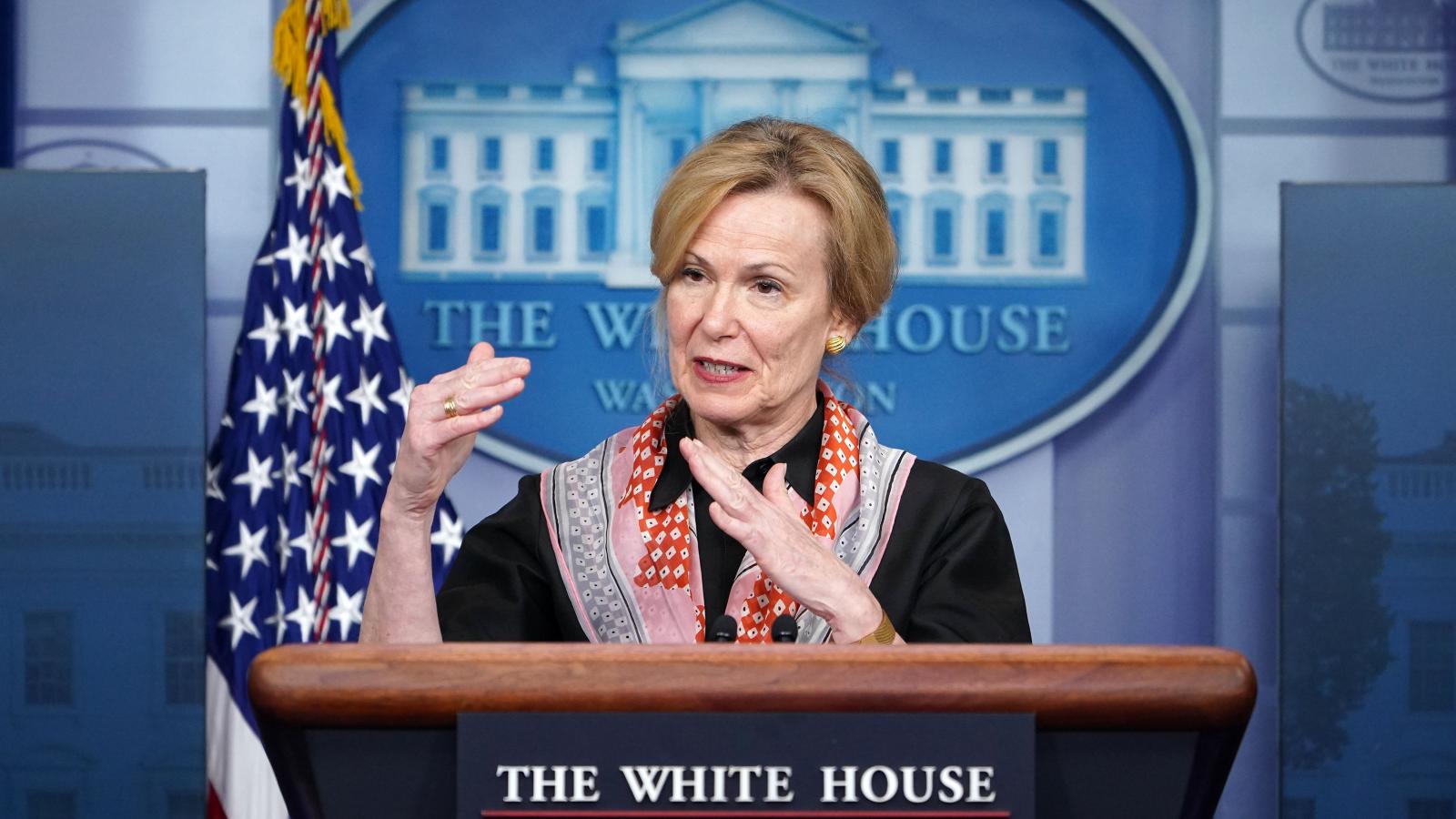 A Web site that tracks actual hospital beds in use suggests the model used by top White House health officials to project the trajectory of the coronavirus has so far  overestimated the number of Americans hospitalized by the disease by tens of thousands.

Those projections, popularly known as the “Murray” model after the model’s lead author, University of Washington professor Christopher Murray, were explicitly cited by Dr. Deborah Birx, the response coordinator for the White House’s Coronavirus Task Force, at a press conference in the last week.

Birx told reporters that Murray’s model, which predicts a shortage of tens of thousands of hospital beds throughout the country by the middle of April, underscored the task force’s “concern that we had with the growing number of potential fatalities” based on the model’s projections. …

Twitter is alive with posts confirming that many of us have been suspicious of Fauci and Birx. So I’m expecting more to come out about them in due time. President Trump has been holding press conferences with his team of professionals every weekday and sometimes on Saturdays, patiently taking questions from rude and facetious reporters. Today he said he would be tuning in online to hear the message by Pastor Greg Laurie.

I am anticipating that this holy week will be memorable in other ways besides the stay-at-home edicts around the country. Q has eluded that there will be “darkness” followed by “a burst of light.” So let’s continue to watch together.

HUGE! From CDC Website: Hospitals to List COVID-19 as Cause of Death Even if It’s “Assumed to Have Caused Or Contributed to Death” – Lab Tests Not Required

Logan Williams, best known for his role as young Barry Allen on The CW’s “The Flash,” died suddenly on Thursday, according to The Tri-City News and social media posts from his co-stars. He was 16.

The cause of death has not been revealed.

Williams was born in Vancouver, Canada, and grew up in the suburb of Coquitlam. According to IMDb, he landed his very first audition at age 10 for the Hallmark movie “The Color of Rain,” working alongside Warren Christie and Lacey Chabert.

He went on to appear in several TV projects, including “The Flash,” “Supernatural” and “The Whispers,” which was co-executive produced by Steven Spielberg. Williams also acted in “When Calls the Heart,” a Hallmark TV series starring Erin Krakow, Martin Cummins and Lori Loughlin. He played Miles Montgomery, the son of Chelah Horsdal’s character Cat Montogomery, in 13 episodes.

His mother, Marlyse Williams, told The Tri-City News that the young actor “had the potential to be a huge star,” noting that he was nominated for best newcomer at the Union of British Columbia Performers Awards in 2015….

Pedophilia in Hollywood is an open secret among those who work there. Many very young actors have died as a result of rape and sodomy. Expecting MANY arrests when the time is right. #pedowood

Things are happening rapidly now, as predicted by Q and many posts by those “in the know” who decode and post on Twitter. I’m going to share a message from someone on Twitter who wrote this morning and who perfectly summed up what is now happening in the hospital in Texas where her sister works as a nurse….

Spoke with my sister who’s a nurse in TX. She’s starting to see a lot of kids show up in the hospital. Not from virus. It seems KIDS ARE BEING RESCUED IN LARGE NUMBERS. Some in bad shape, but will recover physically. Connect the dots yourself, it’s gruesome.

The kids were all rescued. Thank POTUS and those who found and rescued them. Parents being sought now. While minors, most are no longer kids emotionally or psychologically. Badly abused and some in grave shape. If they all make it, all will need psych help. PRAY!!

We want all to know horrendous acts have been happening but heroes are stopping and saving kids. They’ll continue as long as they draw breath. Someone will release much more when appropriate and safe for the kids. Pray for them.

As far as I know our military is responsible for extracting the kids…. The full force of the mightiest military force in history is now rescuing our kids from evil.

Yesterday, Jeffrey Epstein was arrested when he arrived at an airport, returning from somewhere abroad. This marks THE EVENT that we have waited for — one of many actually, but this is HUGE. If you have not read my post about EPSTEIN ISLAND, look for it under the LUCIFER: LANDLORD OF PLANET EARTH heading in the list of pages in the top banner. Here is the link, but you will need to copy and paste it into your browser: https://prophecyconnections.com/2019/04/29/3-digging-really-deep-epstein-island/

This is fantastic and horrible at the same time. Court documents won’t be opened until tomorrow, and already we have news of a 20-year-old Disney star who “died in his sleep” last night. PEDOWOOD is the term that has been laughed at by many.

Cameron Boyce’s Death Mourned by Adam Sandler and Other Co-Stars: “Loved That Kid”

It would seem that kid stars in Hollywood have reason to be scared.

Former Disney star Bella Thorne: “Getting molested from [the age of] 6-14… being abuse all the time…I was being molested….people have no idea the type mistreatment I was dealing with [while a Disney star] that everyone around me saw and did nothing.”

LINK: https://www.biography.com/filmmaker/harvey-weinsteinUPDATED: MAR 19, 2020″Film mogul Harvey Weinstein helped produce such acclaimed features as ‘Pulp Fiction,’ ‘Good Will Hunting’ and ‘Shakespeare in Love.’ He was fired from his studio in 2017 amid allegations of sexual harassment and later convicted of committing a criminal sex act and rape.
“Harvey Weinstein is a former movie producer who established the Miramax Films Corporation with his brother, Bob, in 1979. Miramax went on to produce critical and commercial hits like Pulp Fiction and Shakespeare In Love, and the brothers found more success after launching The Weinstein Company in 2005. Weinstein’s reputation was severely damaged after reports surfaced in October 2017 of his alleged sexual harassment of women, resulting in his expulsion from The Weinstein Company and the Academy of Motion Picture Arts and Sciences, as well as a series of criminal and civil lawsuits. In 2020, he was sentenced to 23 years in prison after being convicted of committing a criminal sex act and rape….Weinstein suddenly found himself in an unfavorable spotlight in October 2017, following a report in The New York Times about his alleged history of sexual harassment. According to the Times, Weinstein had made unwelcome advances on numerous women, including actress Ashley Judd, quietly reaching settlements with at least eight of them. The story gained steam with a subsequent report in The New Yorker, which offered an account of Weinstein’s predatory behavior from Italian actress Asia Argento.Weinstein, who initially threatened to sue the Times, brought in a team of lawyers to combat the charges. Among them was Lisa Bloom, daughter of Gloria Allred, who rejected many of the claims as “patently false,” but also referred to the studio head as “an old dinosaur learning new ways.” Bloom resigned as Weinstein’s adviser days after the scandal broke.Weinstein said in his defense, “I came of age in the ’60s and ’70s, when all the rules about behavior and workplaces were different. That was the culture then. I have since learned it is not an excuse.”

It’s time to start looking at Qanon’s frequent statement: “Future proves past.” I’m going to need time to work on this thoroughly, but for now, here is DROP 133 from November 2017 …

Q!ITPb.qbhqo11 Nov 2017 – 8:29:35 PM
Hard to swallow.
Important to progress.
Who are the puppet masters?
House of Saud (6+++) – $4 Trillion+
Rothschild (6++) – $2 Trillion+
Soros (6+) – $1 Trillion+
Focus on above (3).
Public wealth disclosures – False.
Many governments of the world feed the ‘Eye’.
Think slush funds (feeder).
Think war (feeder).
Think environmental pacts (feeder).
Triangle has (3) sides.
Eye of Providence.
Follow the bloodlines.
What is the keystone?
Does Satan exist?
Does the ‘thought’ of Satan exist?
Who worships Satan?
What is a cult?
Epstein island.
What is a temple?
What occurs in a temple?
Worship?
Why is the temple on top of a mountain?
How many levels might exist below?
What is the significance of the colors, design and symbol above the dome?
Why is this relevant?
Who are the puppet masters?
Have the puppet masters traveled to this island?
When? How often? Why?
“Vladimir Putin: The New World Order Worships Satan”
Q
Q was referencing Epstein Island and the “temple” that was built there. Proof has come out about satanic sacrifice and cannibalism that took place in the tunnels dug DEEP underneath the structure. We learn the following from Q Drop 3050 …

LINK:   https://www.documentcloud.org/documents/1507315-epstein-flight-manifests.html📁
This is not just about sex trafficking [1].
Will the rich & powerful influence the court to prevent the unsealing?
THE TALE OF TWO:
[1] – Sex Resort (non_temple_resort_only) > trafficked & drugged underage girls
[2] – Occult / Worship of Evil (temple) [CLAS 1-99]
Haiti >
Pray for the victims.
Q

Rainn Dietrich Wilson (born January 20, 1966) is an American actor, comedian, writer, director, businessman, and producer. He is best known for his role as Dwight Schrute on the American version of the television comedy The Office, for which he has earned three consecutive Emmy Award nominations for Outstanding Supporting Actor in a Comedy Series.

Here are some links if you would like to DIG DEEPER …

Trump-Linked Pastor: Hollywood Is Full Of Satanists Who Drink Children’s Blood (10/20/2017)  “The human sacrifice and the cannibalism has been going on for years.”  LINK: https://www.huffpost.com/entry/rodney-howard-browne-hollywood-devil-worship_n_59e96616e4b0f9d35bc9a27b

Genesis 6:5
“The Lord saw how great the wickedness of the human race had become on the earth, and that every inclination of the thoughts of the human heart was only evil all the time.”
Psalm 10:15
“Break the arm of the wicked man; call the evildoer to account for his wickedness that would not otherwise be found out.”
Psalm 94:22-23
“But the Lord has become my fortress,