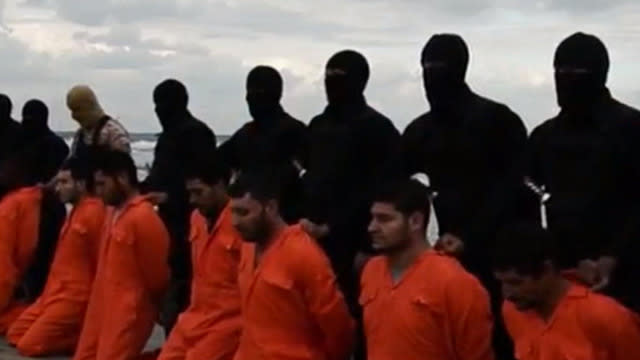 Cairo (AFP) – Cairo carried out air strikes against Islamic State group targets in Libya on Monday after the jihadists posted a video showing the beheadings of 21 Egyptian Christians.

Egypt said a “tough intervention” was needed and with France called on the UN Security Council to “take new measures” against the jihadists in neighbouring Libya.

With Monday’s air strikes, Egypt opened a new front against the jihadists, who it is already battling in the Sinai Peninsula where scores of troops have been killed since the army toppled Islamist president Mohamed Morsi in July 2013.

President Abdel Fattah al-Sisi, the former army chief who overthrew Morsi and has been criticised for a deadly crackdown on dissent, has presented Egypt as a key partner in international efforts against the jihadists.

Monday’s early morning air strikes hit IS camps and stores of weapons, the military said, hours after jihadists released gruesome footage of the beheadings that provoked outrage in Egypt….

[Jesus speaking] “Do not be afraid of what you are about to suffer. I tell you, the devil will put some of you in prison to test you, and you will suffer persecution for ten days. Be faithful, even to the point of death, and I will give you life as your victor’s crown.” (Revelation 2:10, NIV)

“Whoever has ears, let them hear.

“This calls for patient endurance and faithfulness on the part of God’s people.”